‘We will complete the token migration and officially become a public chain on June 21st’ announced by TRON on April 12th. Moreover, they will hold the “super representative”election on June 26th which will bring TRON early into the ‘Odyssey’ period of co-governance between community and foundation. As strategic partners of TRON, “GSC will mobilize our global social users and all top aspects of resources to fully support for the election of TRON, and strive to become the first super representative of TRON” announced by GSC team.

TRON is a decentralized operating system protocol based on block chain. It has successfully launched the Public Chain Test Network on March 31st. They will officially complete the token migration and become one of the most competitive mainstream public chains on June 21st. Also, TRON will hold the ‘super representative’ election on June 26th, the 27 super representative winners will represent the global TRON supporters to provide calculation and verification for TRON network to end the ‘Exodus Period’ which was dominated by TRON foundation, and it will be officially into the ‘Odyssey Period’ of the co-governance by the community and foundation together.

GSC is the world’s first social chain, based on hundreds of millions of users. It is built on the basis of social ecological matrix, including the world renowned Mico social platform which is the core, ande Kitty Live, Waka, YAY GSC is committed to solve the pain points of traditional social platform, subvert centralized social networking giant, reconstruct the value of the next generation’s decentralized social network.

It is worth mentioning that the research of social public chain of GSC is also developing, and recently we have made the stage progress. Applications on MICO will be gradually open for public user testing. We steadily push forward our aim — subverting the traditional social media such as Facebook.

GSC, aimed at building the world-class mainstream chain, speak highly of TRON’s idea of decentralization — “popular sovereignty of the token, natural rights of the token”. GSC foundation says, not only in aspects of our global social users, GSC will also fully support super representative election of TRON in aspects in team, technology, capital and media.

GSC and TRON is fully matched, we are long-term strategic partners of each other, and we have conducted in-depth cooperation in various aspects including technology, users, scenes and resources. GSC’s global network of social users and the entertainment content of TRON are introduced into each other, and the blueprints on the social block chain are continuously extended. GSC and TRON jointly represent that in the future we will not change the original heart to support each other, and will continuously build the world’s two top public chain. 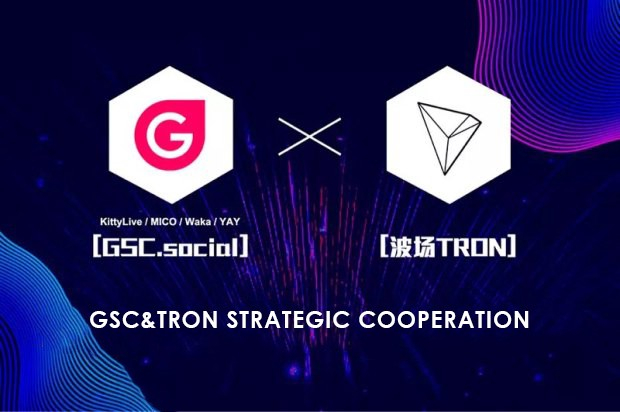